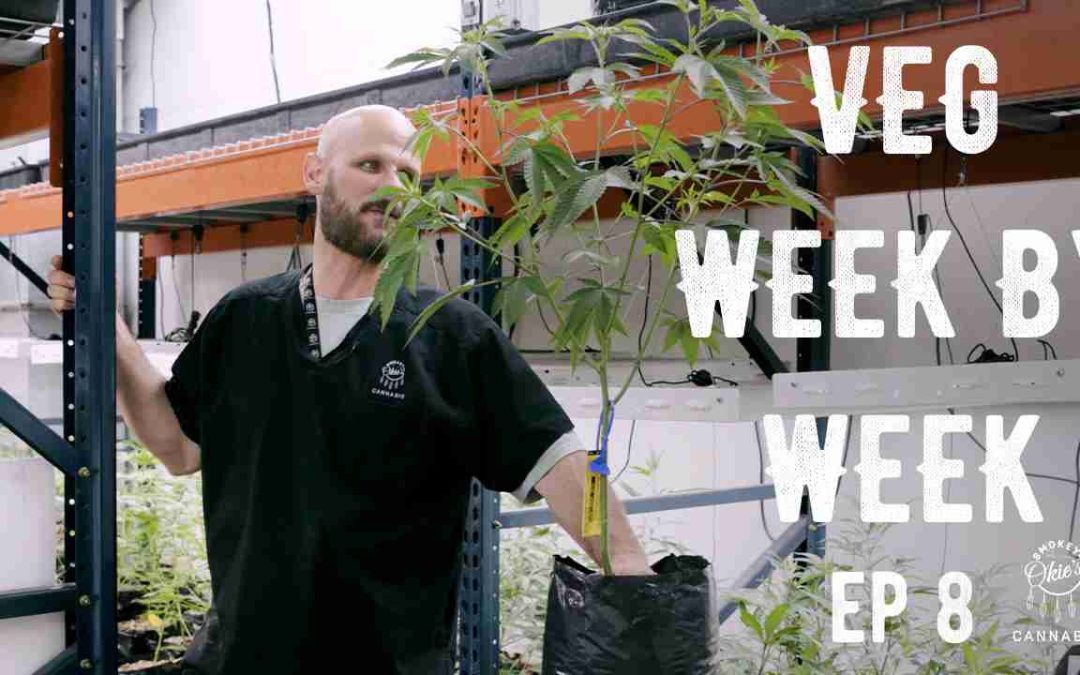 This is final article and video of our Week-by-Week series on the vegetative phase. In this series, we document the process of taking new clones all the way through the vegetative stage, in preparation for flowering.

In this final video, we show you what our plants look like right before we switch them over to the 12/12 flowering light cycle. You will see:

Our plant is much larger two weeks after topping

In the Week 6 video, we showed you how we top our plants. There are actually several different ways of topping, each with a separate objective. As we explained, our way of topping does not involve pinching to create multiple bud sites. Instead, we actually cut off the top half of the plant, to allow the side colas to rise up and become the top.

To some who are used to the pinching method, this could be rather shocking to see. However, as we showed you in the Week 7 video, the plant had grown tremendously in just one week.

Now, in Week 8, you can see that the plant is yet even bigger. And when compared to the total growth throughout veg, our plant now is quite large.  We believe this supports our theory of delaying the topping until later-stage veg, and then cutting off the top as oppose to pinching. We think the results in this video prove the method.

The Benefits of Topping and Pruning right before Flowering

We prefer to wait until the plant is close to being ready for flowering, and then we top it. Our reason is that this allows us to actually mimic the shape of what a mature flowering plant should look like.

As you can see above, this plant has been shaped for an ideal indoor Screen of Green (SCROG) canopy. The bottom half of the plant is completely pruned. There is no vegetation or foliage down by the dirt. The plant itself resembles a concerted effort to push growth the the top. This is exactly what we want.

Once this plant is flipped into the 12/12 flowering cycle, it will go through a stretch period lasting 2 to 3 weeks. During this time, the plant will not only stretch in length; it will grow excessively in every aspect, including bushy, overgrowth of foliage. That means lots of fan leaves, new branches and stems sticking out, new potential bud sites.

To the less experienced, this might sound exciting, but in truth, this is a recipe for extreme congestion beneath the canopy.

The last thing we want is overcrowding of leaves and branches. If this happens, then the lack of airflow can contribute to the spreading of mold, mildew or disease. Second, this congestion will impair light penetration, which will hurt yield and quality.

And the only way to fix these problems is to increase your labor by adding additional time spent defoliating stuff that should never have been there in the first place. There is a better way.

Lollipop your plant in veg before you flip into flower

If you prune your plants like we did in Week 5, then top them in Week 6 to allow the crown to rise above the plant, you will have a lollipop-shape that is ideal for flowering.

Because all of the lower branches were removed during middle-stage veg, there is nothing down there to proliferate during the post-veg stretch. This will save you and your team a lot of man hours that would be spent on defoliation.

And by topping the plant to create our “crown,” we now have a plant that can be easily spread through the trellis netting to create a broad canopy. We firmly believe that spreading the plant through trellis maximizes overall yield.

Wrapping up the Vegetative Stage and heading into the flowering stage

Well, this concludes our eight weeks of the vegetative stage. We started with clones in Week 1 and worked our way through eight weeks of veg. We demonstrated the perks of using two different sizes of pots when the plant is young to encourage proper root development. And we covered our philosphies on pruning and topping to shape the plant for the flowering stage.

At this point, head on over to our Week-by-Week Guide to Flowering Cannabis Indoors. In that series we go through nine weeks of the flowering stage and show you what we do.

One last thing before we part: in our Week-by-Week series on the flowering stage, we actually failed to heed our own advice… and it’s okay to judge us for this failure.

Prior to filming that series, we did not follow the same vegetative pruning/topping strategy that we discuss in this series.  Instead, those plants were topped very early in veg.

Because we topped those plants early in veg, we had many new branches near the bottom of the plant. Once those plants went into flower, that bottom half of the plant exploded, requiring us to spend much more time on defoliation.

You can see for yourself the mess we created in the Week 4 video. The space beneath the canopy is extremely congested and crowded. That is what happens when we fail to heed our own advice!